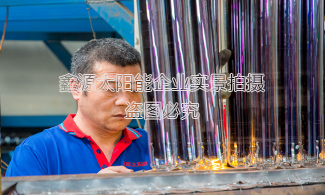 1. Fundamental difference: Different film structures lead to different principles of absorbing sunlight. Gradient film is a multi-layer film. Its absorption layer is usually 9 layers. It absorbs solar light layer by layer, and its absorption performance is gradually improved. As a result of this gradual structure, the emission ratio increases with the increase of temperature, so that the emission ratio increases greatly when the working temperature is 300 ~ 500 ℃. In addition, the activity of Al ions in the absorption layer is greatly enhanced and drift occurs at high temperature. In this way, the internal structure of the film is disordered, which leads to the aging of the film. In this high temperature condition for a long time, the film will fall off, thus affecting the collection efficiency and life of the vacuum tube.

2. Characteristic: The absorption ratio of the three-high pipes increased by 12%, the emission ratio decreased by 30%-40%, the super absorption, less heat loss and faster heating. High efficiency tube, super absorption, high thermal efficiency, fast heating, under the same light conditions, more and higher water temperature hot water can be produced than ordinary tube; Alpine tube, because the emission of copper ions is 0.2 lower than that of aluminum ions, so heat loss is very small, it can still work normally in high-cold environment, - 30℃ hot water; High temperature special effect tube, because the stainless steel ions in the film are resistant to high temperature, air and sunshine, film layer. No ageing, no fading and no color change at 400 ℃.

Under the same illumination conditions, the heat absorption of ordinary pipes is not as high as that of three-higher pipes, or even can not meet the requirements of bathing; when the temperature is low, the heat loss is greater, the heat collection efficiency decreases, affecting the normal use; especially when the air temperature exceeds 270 ℃, the film begins to aging and fall off, the absorption rate decreases rapidly, and the service life is greatly shortened.